I found this wonderful piece of Bjørre at an auction in US. Only to know it was already sold. It is one of my father`s best decorations, at least I think so. Would really love to have it in collection, but alas, it is far away in the US.
Lagt inn av Pål kl. 07:30 Ingen kommentarer:

I will now present to you some of the products my father have decorated. Some of them I have bought by using internet, others at flea markets, and some have been in our family all the time.

Bjørre Keramikk was founded at the end of 1945. The founders was my grandfather Gunnar Remen and a keramicist named Egil Bjørnholt. The name Bjørre consists of “Bjør” from Bjrønholt and “re” from Remen. The production started in Grønlendaleiret no.73 in Oslo, Norway. My father started to work with Bjørre in 1946 as a decorator, and my uncle Gunnar Remen was also working in the production. They produced mostly artifacts and decorating pottery,  like urns, trays and pitchers. My grandfather traveled around the country with pictures of the production and the sales was brilliant. The production increased and they had to move to larger premises in Leangbukta in Asker, outside Oslo.
At this time, they were about 13-15 employees, of these up to 8-10 decorators. I have the name of some of them: Kari Sinding, Margrete Dedekam, Astri Bjørnholt (the sister of Egil). There were also one “nn” Samdemose and “nn” Grundtvig.
During their studies at the “Kunst og håndverksskolen” (art and crafts university) in Oslo, both Eystein Sandnes and Thias Eckhoff had their practice time with Bjørre. Later, Eystein Sandnes was an employee and was designing new porcelain dishes. Some of it was produced, but they did not achive any support to the production, so the project was stopped. Later Eystein sandnes was hired as artistic leader at porsgrund Porselen, and the same porcelain dishes was produced there and handed over as a gift to the royal princess Astri. The dishes was later a smashing hit for Porsgrund Porselen.
Both Eystein Sandnes and Thias Eckhoff developed into two of Norways leading designers. The well  known  Norwegian sculptor  Fritz Røed frequented Bjørre, to have some of his sculptures burned in the ovens. He is later well  known for the “Sverd I fjell” ( sword in rock) at Hafrsfjord near Stavanger. Bjørre did not stay in business for long. Due to some bad glace  from  UK, the whole production failed in 1951,  and the had to close down the company.
Me and my sister is collecting every piece of Bjørre we can come  over,  and  by now I have about 50 products, and my sister has close to 80 pieces. Bjørre Norsk keramikk is described in the book: “Moderne antikviteter”  written by Astrid Olsen and Rolf Simeon Andersen, Lunde publishing.
If anyone know more about Bjørre, or know about other products, we would be very happy to know about it. And if anyone should come over products for sale, please let me know.
Lagt inn av Pål kl. 15:25 3 kommentarer:

I have now kopied some old historical pictures from the production at Bjørre keramikk. The quality of the photos are not exelent, but the photographic equippement right after the 2. world war was not the best. anyway, It is interresting to see how the production was at that time. The picture on the top of the blog shows the keramicist and partner at Bjørre at work. Following is some pictures from the decorators work. My father in deep consetration with a big urn with an egyptian scene. I would like to have  this one in my collection. Anyone know about this one? Give me a sign!

Finally I have got this blog "up and going" about my interest for the Norwegian ceramic pottery from Bjørre.
I will here give you the part of the "history of Bjørre", that I have learned from my father and mother. I will show you mine, and my sister Gurå`s collection of products from Bjørre. Our interest for Bjørre is of course connected to the fact that our grandfather was one of the owners, and our father was one of the decorators. Our uncle, our mother`s brother, also worked for Bjørre at the same time.
Lagt inn av Pål kl. 14:08 2 kommentarer: 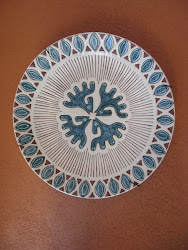